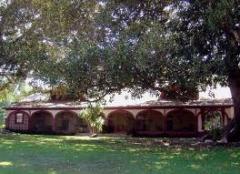 Rancho Los Alamitos, which began as a simple adobe building early in the 19th century, reflects the physical and cultural changes that took place in California from the Spanish colonial period.

Rancho Los Alamitos (Ranch of the Little Cottonwoods) began in the early 19th century as a simple adobe building serving as the center of a cattle ranch. Later owners, including Mexican governor José Figuero, American Abel Sterns (the first alcalde, or mayor, of Los Angeles during the Mexican period), and the Bixby family transformed the building into an elegant 18-room ranch house. In the early 20th century, the grounds were planted with extensive landscaped gardens. The Bixby family donated the ranch house and grounds to the city of Long Beach in the 1960s.