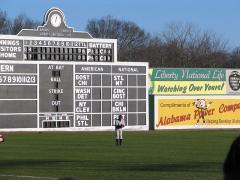 Opened on August 18, 1910, Rickwood Field is one of the oldest baseball parks in the country. Financed by Rick Woodward, Rickwood Field was constructed as a home ballpark for the Birmingham Barons, who played in the Southern Association, a top-level minor league.

Since 1992 the Friends of Rickwood have supervised its maintenance and schedule. While the Barons, a Double-A affiliate of the Chicago White Sox, play their home games in Hoover, Alabama, they play one throwback game at Rickwood Field in period uniforms.