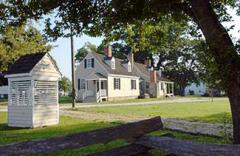 Schwartz Tavern was once operated by John A. Schwartz. Since Schwartz is German for Black, his establishment soon became known as Black's. Another tavern in Blackstone was operated by a man named White. The crossroads stop for stagecoaches was called Black's and White's after the two rival tavern keepers. The name remained the same until 1886 when citizens adopted the name of the noted English jurist, Blackstone.