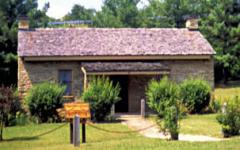 The small, stone Rock House, originally built to collect tolls on a private road, was built between 1835 and 1839 by Barlow Fiske, who operated a stage coach inn and stables nearby. It played an important role in the early development of Tennessee's transportation system. Andrew Jackson often stopped here on trips from Nashville to Washington. Other notable visitors included James K. Polk, Sam Houston, and Frank Clement, all once governors of the Volunteer State.