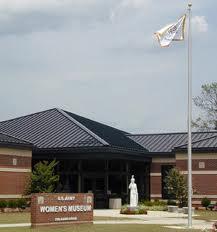 This museum, located at Fort Lee, traces the history of women in the military and military nurses from the American Revolution to the present, including the advent of the WACS in World War II.

On 18 August 1961, the WAC Museum was renamed the Edith Nourse Rogers Museum in honor of the Congresswoman from Massachusetts who introduced bills in 1942 and 1943 which established the Women's Army Auxiliary Corps (WAAC) and later the WAC. The decision was made in 1977 to return to the original title of the Women's Army Corps Museum. This was done to reestablish the connection between the name of the museum and the artifacts it housed.

The groundbreaking for the current museum was held on April 9, 1999 and construction was completed in October 2000. This was followed by the installation of new exhibits and the dedication of the museum on 11 May 2001. The biennial Army Women's Reunion was held in conjunction with this event.