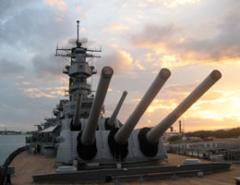 Residing today just outside of Hawaii's Pearl Harbor, this Iowa-class battleship was the site of the 1945 surrender of the Japanese army, officially ending World War II.

The Missouri secured its place in history as the site of Japan’s unconditional surrender to the Allied Forces on Sept. 2, 1945, ending World War II. The ceremony for the signing of the Formal Instrument of Surrender was conducted by Supreme Allied Commander, General Douglas A. MacArthur. After World War II, the Missouri served in the Korean War, was decommissioned, then recommissioned to go on to serve in the 1991 Persian Gulf War.