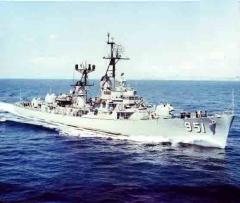 The USS Turner Joy (DD-951), famed Navy destroyer from the Vietnam War, is now maintained and administered by the Bremerton Historic Ships Association. The ship was involved in the Gulf of Tonkin Incident in August 1964 when North Vietnamese naval forces attacked the USS Turner Joy and the USS Maddox. The attacks prompted the US Congress to issue the Gulf of Tonkin Resolution, which provided a legal justification for the escalating conflict in Vietnam.

The museum ship and memorial honors not only the men and women of our modern US Navy, but also recognizes the accomplishments of those who help build and maintain the Navy's ships as well. An active and educational facility makes the USS Turner Joy a unique and lasting legacy to Puget Sound's maritime heritage.