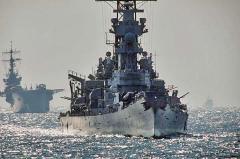 This Iowa-class battleship was launched in late 1943 and went on to serve in multiple conflicts after World War II.

The USS Wisconsin, launched on December 7, 1943, the second anniversary of the bombing of Pearl Harbor, served in WWII, the Korean War, and the 1991 Gulf War. It now functions as a museum ship, operated by the Hampton Roads Naval Museum at Nauticus, the National Maritime Center in Norfolk, VA.