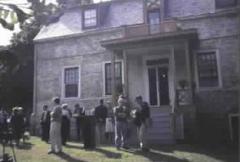 The home, once used as military headquarters, contains exhibits on 18th century life and original furniture.

Situated at the strategic junction of the Hudson and Mohawk Rivers, the 18th-century brick mansion served as military headquarters during the French and Indian War, the Revolutionary War, and the War of 1812. The restored, Dutch colonial house museum contains 18th-century furniture donated by Alice Shelp, a Van Schaick descendant, and features rotating collections from the New York State Museum.

Open for viewing by appointment--no group too small.