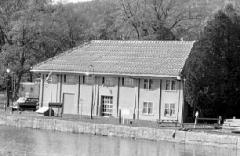 The Skenesborough Museum concentrates on the history of the area, along with a focus the U.S. Navy and forms of transportation. The site, a previously unused canal terminal, lends itself to large displays. A 16-foot diorama shows the home and out buildings of the community’s founder. Also included in the museum are the seven different ways in which ships were first built in Skenesborough. The museum has everything from wooden ship models to early fire equipment to photographs and family records.