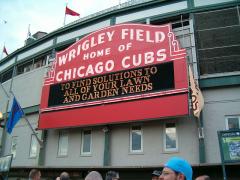 Opened in 1914, Wrigley Field is the second oldest Major League Baseball stadium in use, behind Fenway Park. Originally named Weeghman Park, its first tenants were the Chicago Whales of the Federal League before the Chicago Cubs became the primary tenants in 1916. While the stadium was constructed for baseball, the Chicago Bears played at Wrigley Field between 1921 and 1970.

Several unusual features embody Wrigley Field. The outfield wall is made of solid brick and is covered with ivy, which is in play for baseball games. While most of the ivy has not grown in during the Spring, the wall is usually covered with the ivy in full bloom in the second half of the season. In addition, the Cubs only played day games until 1988, when Major League Baseball threatened moving postseason games away from Wrigley Field if the ballpark refused to install lights. Wrigley Field also houses one of two hand-turned scoreboards (along with Fenway Park) still in operation.