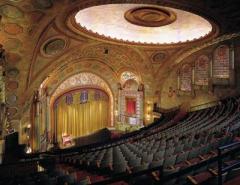 The Alabama Theatre was built in 1927 by Paramount Studios as an Alabama showcase for Paramount films. It was used primarily as a movie palace for 55 years, with the exception of the annual Miss Alabama pageant and the weekly Mickey Mouse Club. In 1987, the owners of the facility declared bankruptcy and the theatre was purchased by Birmingham Landmarks Inc., a non-profit corporation.

The new Alabama Theatre for the Performing Arts hosts many live events, as well as films. Each year the Theatre hosts over 300 events attended by a half million Birmingham area citizens.

In 1998, the Theatre underwent a complete front door to back door restoration. The work was done by EverGreene Studios from New York City. In 8 months, the theatre went from its look of faded grandeur to a sparkling 1927 look with all the gold leaf paint either replaced or cleaned. In addition to the restoration, new carpet was installed in the ladies lounge and new drapes were installed on the stage and organ chambers.