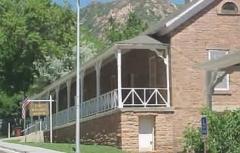 The 1862 fort was built to protect telegraph and railroad lines from the Indian populations that the U.S. government feared would would act destructively. However, federal authorities likewise sought to effect a measure of surveillance over the Mormons making their way west to Utah, and they used the fort for this purpose as well. The museum on site chronicles the military history of the fort and the surrounding area, and features a new exhibit on the uniforms of cavalry soldiers between 1840 and 1940.