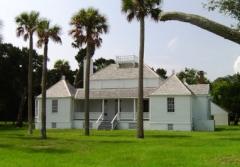 The Kingsley Plantation, administered by the National Park Service, is located on Fort George Island and includes the plantation house, a kitchen house, a barn, and the ruins of 25 of the original slave cabins. The history of the island spans more than 1000 years beginning with the Timucuan Indians. The structures at the site, however, date to the plantation era of the island. The Kingsley Plantation was named for one of several plantation owners, Zephaniah Kingsley, who operated the property from 1813-1839. Kingsley operated under a "task" system, which allowed slaves to work at a craft or tend their own gardens once the specified task for the day was completed. Proceeds from the sale of produce or craft items were usually kept by the slaves. Purchased as a slave, Kingsley's wife, Anna Madgigine Jai, was freed in 1811. She was active in plantation management and became a successful business woman owning her own property. As an American territory, Florida passed laws that discriminated against free blacks and placed harsh restrictions on African slaves. This prompted Kingsley to move his family, impacted by these laws, to Haiti, now the Dominican Republic, where descendants of Anna and Zephaniah live today.