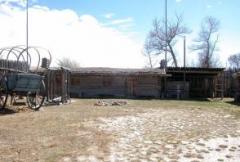 It was obtained by the Mormons in the early 1850s, and then became a military outpost in 1858. In 1933, the property was dedicated as a Wyoming Historical Landmark and Museum. There are several restored historical buildings from the military time period, a reconstructed of the trading post operated by Jim Bridger, and an interpretive archaeological site containing the base of the cobble rock wall built by the Mormons during their occupation of the fort. All of these locations are signed in Braille. In addition, a museum containing artifacts from the various different historical time periods is housed in the 1888 stone barracks building.