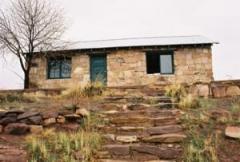 These camps were typically built of relatively temporary frame construction, and the surviving buildings and features such as the stone terraces at the Leeds camp present a unique, if somewhat limited, view of these important facilities. The economic impact of the Great Depression was especially severe in Utah where unemployment averaged 25 percent during the 1930's and was once as high as 36 percent. Because of the pressing need for conservation work, such as flood control, water resource development, etc, in the arid climate of southern Utah, the CCC work projects were of great importance locally.

Approximately 250 men were housed in frame barracks that were located to the southwest with other buildings such as a mess hall, library, and showers. The remaining stone structures are but a few of those originally built. The men were typically from out-of-state and served in the CCC for 9 to 12 months. Temporary remote "spike" camps were established near many of the actual construction projects. The Leeds CCC Camp was closed in 1942, and most of the frame buildings were removed before 1950.