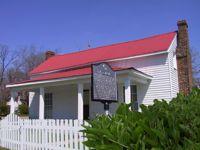 The McLemore House Museum serves to preserve the heritage of the African American culture in Franklin.

The McLemore House Museum is a project of the African-American Heritage Society, a non-profit organization whose purpose is to collect, preserve, and interpret artifacts pertaining to Williamson County African American culture and increase understanding and appreciation of our heritage for future generations.

Ex-slave Harvey McLemore purchased four lots in Hard Bargain in 1880. He built one of the first residential dwelling in the subdivision. The home served as a model of community development in Hard Bargain, the first subdivision of its kind in Franklin--a black middle class neighborhood of teachers, carpenters, masons and farmers.

During an age where very few homes purchased by former slaves remain in existence, it is quite remarkable that the McLemore House is still standing. Also remarkable is the fact that from 1880 until 1997, a member of the McLemore family maintained ownership of the homestead.

The house was purchased through the joint efforts of the Williamson County Habitat for Humanity and the Heritage Foundation of Franklin and Williamson County. The one remaining parcel of the original four lots was divided into two lots, and the newly formed African American Heritage Society, with assistance of the Heritage Foundation, purchased the lot on which which the dwelling sits.
The African-American Heritage Society views their commitment to the museum as a way to promote cultural and historical preservation, encourage tourism, create family legacies, and educate the public about the rich black heritage of Franklin and Williamson County. The successful completion of the McLemore House Museum will be an outstanding achievement, locally, statewide and nationally.