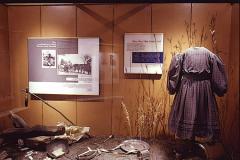 On October 25, 1864, approximately 2,800 Union troops attacked and defeated about 8,000 Confederates along the banks of Mine Creek. This was one of the largest cavalry battles in the Civil War and was the only major battle fought in Kansas. The Union brigades were commanded by Colonels Frederick W. Benteen and John F. Philips. After this battle, Federal forces pursued and defeated additional Confederates in Missouri as they attempted to return to Arkansas, Indian Territory (Oklahoma), and eventually Texas.