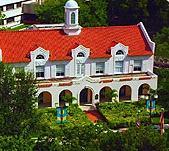 The first city hospital, which opened at the time of the influenza epidemic of 1918, is Miami's oldest surviving hospital building. It was designed by August C. Geiger, who is best known for creating Mediterranean Revival style buildings. The Alamo got its nickname because its Spanish-inspired design is reminiscent of the Texas landmark. The building was moved to its present location in 1979 and now serves as an information center for Jackson Memorial Hospital. This building was listed in the National Register of Historic Places in 1979.