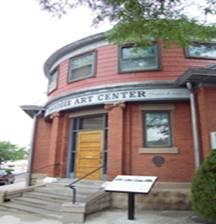 Formerly the library in Dodge City , this building was established sometime prior to 1905, when Dr. C.A. Milton, Judge E.H. Madison, L.J. Pettijohn, and others first discussed the idea of providing the town with a public library building. Previously, a library had been organized in 1885 and set up in the office of the county superintendent.

With the encouragement of the Women's Club, Judge Madison wrote to Andrew Carnegie, who responded on February 1, 1905, stating he would give $7,500 for a library building (an amount later increased to $8,500). C.W. Squires, of Emporia, was chosen as the architect. The contract was given to William Foley; W.B. Rhoads performed the cement work; Sturgeon Brothers provided the brick; and Tieffenbach Brothers were in charge of interior decoration. The library was opened to the public February 1, 1907.

The former Carnegie Library building was sold and, for ten years, was the home of five different clubs and restaurants: The Red Palace, Casey Jones Junction, Carnegie Hall, Opera House 21, and The Library. It was twice saved from the wrecking ball before it was rescued by the community as an arts center. The building was placed on the National Register of Historic Places early in 1979. It is also one of Dodge City's Historic Landmarks. A $93,000 federal grant was received to help restore the building, assisted with funds from local fund-raising efforts. The building now operates as the Carnegie Center for the Arts. Featuring a round second-story gallery this unique home to the Dodge City Arts Council provides gallery space and a small gift-shop for local artisans.