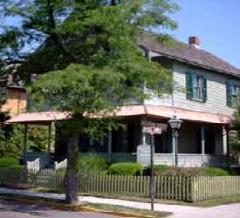 The house is constructed in the Chalet style, reminiscent of Swiss and Bavarian Alpine Chalets. The Chalet style is one of the various Carpenter's or Stick styles popular in the latter half of the Nineteenth Century and Ocean Grove boasts many fine examples of this type of architecture including the Great Auditorium. The exterior of the house has been restored to it original colors as have several of the Cottage's rooms.

While no interior photographs of the Cottage exist in the Historical Society's archives, there are many of other interiors from the period and these were used in decorating the Cottage in an appropriate style.

As well as being a living history museum, the Cottage is also the site of various exhibits and events throughout the season including the Florigraphy exhibit which delves into the explanations of the Victorian symbolisms for the various flowers and plants used during the 19th Century and their religious significance. The Cottage is also host to events such as the Candlelight Tour and Garden Party and numerous children's programs.