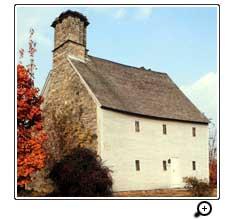 Though over restored, the Arnold House is still the best of the "stone-enders" remaining in Rhode Island. Now owned by the Society for the Preservation of New England Antiquities (SPNEA) and operated as a house museum, the Arnold House has been recorded by the Historic American Building Survey, declared a National Historic Landmark, and described in the major books in Rhode Island's-and the nation's-architectural history. The house was built by Eleazer Arnold, son of Thomas Arnold who had purchased the large tract of land surrounding the area (sometimes known as "World's End") in 1661. In 1710, Eleazer Arnold was licensed as a tavern keeper and entertained travelers in this house on the Great Road. After Arnold's death in 1722, the house passed to successive generations of his family through the 19th century, giving rise to the saying that "only Indians and Arnolds" had ever owned this land. In 1918, several descendants who owned the house made a gift of it to SPNEA. Two stories high and set under a gable roof, the most prominent feature of the Arnold House is the great widened stone-end chimney built of local stone with a plastered top. During a series of restorations some of the Arnold House's exterior features have been reinstalled, including its small, leaded, casement windows and plank door. Its great, central, cross-gable dormer, however, has never been reconstructed. The house is two rooms wide, and two deep, with a lean-to built across the north side. The heavy posts and beams are exposed and the summer beam chamfered. The walls are paneled with beaded vertical boards; broad stone fireplaces fill the western wall.