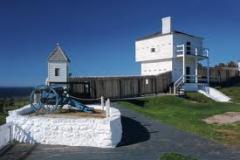 Fort Mackinac was a major military outpost during the Revolutionary War and War of 1812.

Fort Mackinac was founded by British troops at Mackinac Island during the American Revolution, and subsequently won by the Americans in 1796. The British recaptured the fort in July of 1812, in the first land engagement of the War of 1812 in the United States.The fort was returned the Americans at the climax of the war and remained an active military outpost until 1895. It became a major fur trade outpost, and later, a summer resort.

The stone ramparts, the south sally port and the Officer’s Stone Quarters standing today are all part of the original fort built over 225 years ago. The other buildings in the fort are of more recent origin, dating from the late 1790s to 1885. The buildings have been restored to how they looked during the final years of the fort’s occupation. Interpreters depict U. S. Army soldiers from this same period, dressed in distinctive Prussian-inspired uniforms.