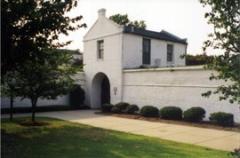 Stepping through the fort's arched entryway transports visitors to another era. The fort's four-acre site overlooks the Elizabeth River and includes earthwork embankments, ramparts, a dungeon, officers' quarters, powder magazine, barracks, and guardhouse. Most structures in the fort date to 1810. The fort helped protect Norfolk during the War of 1812 as well. In the Civil War, Confederate forces seized the fort and used its magazine to supply the CSS Virginia (Merrimack) during its battle with the USS Monitor. In 1862, the fort was recaptured by the Union Army and used as a prison. In 1923, the fort was occupied by the U.S. Army Corps of Engineers, which still owns Fort Norfolk. The Norfolk Historical Society began making restorations to the fort in 1991.

Located in the Ghent section of Norfolk, this is the last remaining of 19 harbor forts authorized in 1794 by President Washington. Overlooking the Elizabeth River, the four-acre site includes earth embankments, ramparts, a dungeon, officers' quarters, a powder magazine, barracks, and a guardhouse. Most structures date back to 1810.