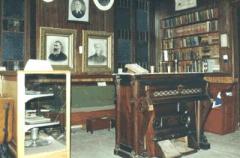 Following the Civil War, the building came into possession of the Methodist-Episcopal Society, which in turn painted the exterior beige with chocolate trim, addressed the interior's crumbling plaster by covering it with local hemlock paneling, and added paired stained and etched glass windows (seen in the picture below), as remodeling in the then-popular Carpenter Gothic proceeded.

In 1943, George Ames bought the then-vacant building and gave it to Gilford's newly formed historical society which then took the name "Thompson-Ames Historical Society" to honor the benefactor's lineage.

On the NH State Register of Historic Places, the Union Meetinghouse is the setting of most of the historical society's monthly programs.