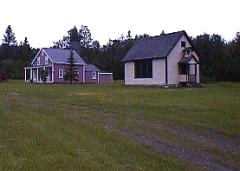 The Acadians were people from France who settled on Acadia, now known as Nova Scotia, in the 16-17th century. In 1755 they were deported by the English Goverment to all points of North America and Canada. The Acadians who settled in the Saint John Valley had settled in St. Anne Des Pays Bas, Fredericton. When the Loyalists chased them off their land once more, they made their way up the St. John River and came to settle in St. David, in 1785.

The Acadian Village was built by the Heritage Vivant, our Living Heritage Society of Van Buren, in 1976 in order to preserve the heritage and history of the Acadians.