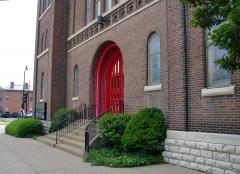 The Lincoln family began attending the church in 1850 after the death of three-year-old Edward Lincoln. Dr. James Smith, the pastor at the time, had conducted Eddie's funeral service in the Lincoln home. Abraham Lincoln did not formally join the church, but his wife Mary became a member on October 13, 1852. Their youngest son Thomas (Tad) was baptized in the church on April 4, 1856, which was his third birthday.

The present structure, built three years after President Lincoln died, was the site of Mrs. Lincoln's funeral on July 16, 1882. A stained glass window in the front features President Lincoln in the middle, flanked by Florence Nightingale and Clara Barton.

The old Lincoln pew now occupies a place of honor in the narthex where it is embellished with flags and a silver marker.