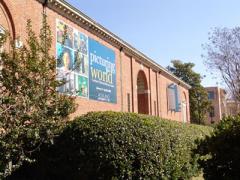 The Ackland Art Museum was founded through the bequest of William Hayes Ackland (1855-1940) to the University of North Carolina at Chapel Hill. The Ackland Trust provided the funds to construct the museum building, and that trust continues to provide for the purchase of works of art. Mr. Ackland, a native of Nashville, TN, graduated from Nashville University and received a law degree from Vanderbilt University.

In 1936, although not a collector himself, he took steps to establish a museum at a southern university. As the words of his tomb suggest, "he wanted the people of his native South to know and love the fine arts." He was also concerned that the museum be connected with a "great university" with existing cultural interests. When Mr. Ackland died in 1940, he left his bequest to Duke University. Duke's trustees, however, objected to stipulations that Mr. Ackland be buried in the museum named after him and that his money be managed by trustees in Washington, D. C. They refused the bequest and started nine years of litigation that resulted in the award of the Ackland Trust to the University of North Carolina at Chapel Hill, one of the other schools previously considered by Mr. Ackland.