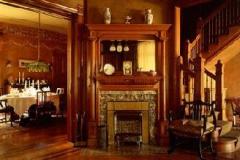 In 1930 pioneer businessman W.E. Adams founded the Adams Museum in downtown Deadwood with the purpose of preserving and displaying the history of the Black Hills. He donated the building to the City of Deadwood and placed the operation of the organization in the hands of a board of directors. The board oversaw the collecting of some of the Black Hills’ greatest treasures including Potato Creek Johnny’s gold nugget, beloved American illustrator N.C. Wyeth’s pencil sketch drawing of Western legend Wild Bill Hickok, the mysterious Thoen Stone record of the Ezra Kind party’s discovery of gold in the Hills in the 1830s and a one-of-a-kind plesiosaur (marine reptile).