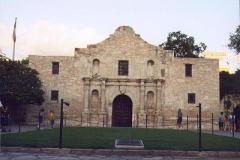 Although the Alamo fell in the early morning hours of March 6, 1836, the death of the Alamo Defenders has come to symbolize courage and sacrifice for the cause of Liberty. The memories of James Bowie, David Crockett, and William B. Travis are as powerful today as when the Texan Army under Sam Houston shouted "Remember the Alamo!" as it routed Santa Anna's forces at the battle of San Jacinto on April 21, 1836. The Alamo has been managed by the Daughters of the Republic of Texas since 1905. Located on Alamo Plaza in downtown San Antonio, Texas, the Alamo represents nearly 300 years of history. Three buildings - the Shrine, Long Barrack Museum, and Gift Museum - house exhibits on the Texas Revolution and Texas history. Visitors are welcome to stroll through the beautiful Alamo Gardens.