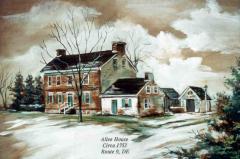 According to tradition, the Allee House was built about 1753 by Abraham Allee, the son of John Allee, a Huguenot refugee from Artois, France. The house Abraham Allee built at Bombay Hook features fine brickwork laid in Flemish bond with a few glazed header bricks. Originally consisting of four rooms, Allee House expanded with a that was added some time after the original four rooms. During the restoration of the Allee House it was discovered that much of the early wrought iron hardware was still in place. This restoration was complete in 1966, and the house went on the National Register of Historic Places in 1971.

Currently the house is closed until further notice.