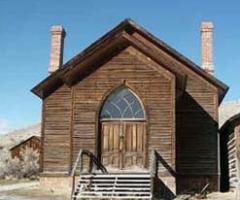 As news of the gold strike spread many prospectors and businessmen rushed to Bannack hoping to strike it rich. In 1864, Bannack was named as the first Territorial Capital of Montana. Remaining in Bannack for only a short time, the Capital moved on to Virginia City. In 1863 gold had been discovered near Virginia City and at that time many prospectors left Bannack in hopes of finding the mother lode in Virginia City. However, some people stayed in Bannack and explored the use of further mining techniques. From the late 1860's to the 1930's, Bannack continued as a mining town with a fluctuating population. By the 1950's gold workings had dwindled and most folks had moved on. At that point the State of Montana declared Bannack a State Park. Today, over sixty structures remain standing, most of which can be explored. People from all over visit this renowned ghost town to discover their heritage.