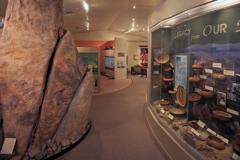 The museum’s collection represents thousands of years of history—some objects dating as far back as 10,000 years—and it demonstrates the artistry and skill of the hemisphere’s first inhabitants. The Barona Cultural Center & Museum showcases maps and treaties of ancient Tribal territories, interactive displays of Kumeyaay/Diegueño life, listening alcoves featuring sounds and songs of ancient Native American life and exhibits that illustrate important industries of the people, such as basketry, pottery making, and flaking of stone tools. The museum’s collection includes everyday items such as coiled baskets and grinding stones, ceramic and shell objects (some ceremonial), and currency.