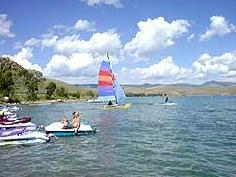 The Bear Lake Valley was first inhabited by Shoshoni Tribes, then fur trappers. Between 1825 & 1840, many mountain men and Native Americans met on the south end of the lake to swap goods and stories! These meetings became known as mountain man rendezvous. Don't miss the re-creation of the mountain man rendezvous held in mid-September on Rendezvous Beach.

The first permanent settler to the Bear Lake Valley was reportedly Thomas Pegleg Smith, a crusty, one-legged, ex-mountain man. During the 1840s, he set up a trading post to provide supplies to the emigrants on the famous Oregon Trail. Early Mormon pioneer leader Brigham Young sent the first group of permanent settlers to Bear Lake Valley in 1863. This group was led by Charles C. Rich. The County bears his name.