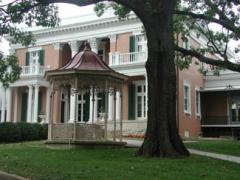 The moving spirit of Belmont Mansion was Adelicia Hayes Franklin Acklen Cheatham. Born on March 15, 1817, to an affluent Nashville family, Adelicia's teenage fiance' died before their marriage. At the age of twenty-two, Adelicia married Issac Franklin, a wealthy bachelor twenty-eight years older than she. The marriage produced four children, but unfortunately all died before the age of twelve. Seven years after they married, Franklin died, leaving Adelicia one of the wealthiest women in America.

In 1849 Adelicia married Joseph Acklen, a young attorney from Alabama, and they immediately began construction on Belle Monte (Belmont.) An Italianate-style villa, it was a summer home escape from the heat at her 8,400 acre Louisiana cotton plantation. The Acklens built, furnished, and landscaped one of the most elaborate antebellum homes in the South, with 36 rooms and 19,000 sq. ft. The estate contained an art gallery, conservatories, lavish gardens, aviary, lake and zoo.

Joseph and Adelicia had six children, but the twins died of scarlet fever. Later, Joseph died in Louisiana during the Civil War. Left alone, Adelicia secretly negotiated agreements with both sides to allow 2,800 bales of her cotton to be shipped to England and sold for $960,000.

Immediately following the war, Adelicia and her four children traveled to Europe. While there, she continued amassing her large art collection, including five major marble statues by America's most important sculptors working in Rome. Four of these pieces remain in the mansion today.

Today the gilt frame mirrors hanging over original marble mantels, still reflect the elaborate gasoliers and elegantly furnished parlors. The Grand Salon is considered by architectural historians to be the most elaborate domestic interior built in antebellum Tennessee. The gardens, now maintained as part of the college campus, contain marble statuary and the largest collection of 19th century cast iron garden ornaments in the United States, including five cast iron gazebos.