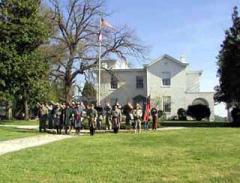 Bleak House, an antebellum mansion of fifteen spacious rooms and wide halls, stands well back on an eminence among lovely trees and elaborately landscaped grounds. The property fronts 250 feet on Kinston Pike and extends over 900 feet in terraced gardens down to Fort Loudon Lake (Tennessee River). The house was built for Robert Houston Armstrong and Louisa Franklin as a wedding gift. Louisa’s father, Major L. D. Franklin, built the house; Robert’s father, Drury Armstrong of Crescent Bend, donated the land. The young couple named their stately home, “Bleak House,” for Charles Dickens' then currently popular novel of that name.

During the siege of Knoxville by the Confederates under General James Longstreet, November 17 to December 4, 1863, Bleak House was the headquarters of General Longstreet and his staff. A first-hand account of the occupation and the fighting around her home was told in a letter written by Mrs. Louisa Armstrong and published in the Knoxville Journal and Tribune on September 27, 1898. Much has been done toward maintaining the house and grounds and restoring them to their original grandeur and elegance.