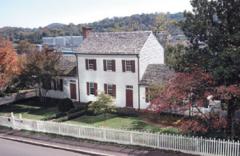 Nestled in the center of Downtown Knoxville's government district, Blount Mansion offers history that is hard to miss. Here, among the towers of glass, steel and brick, sits a house - small by today's standards, but a mansion on the Tennessee frontier. Known by the Cherokee Indians as "the house with many eyes," Blount Mansion has watched American history parade through its rooms and on the streets outside.

Blount Mansion was the home and capitol of the first and only governor of the Southwest Territory, William Blount, his family, and ten African-Americans. Blount was a signer of the U.S. Constitution and played a pivotal role in Tennessee becoming the sixteenth state.