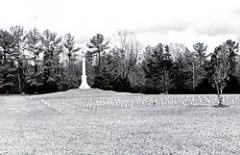 In May 1861, the site for the camp was selected and the troops began to arrive. The new camp was named for Governor Thomas Overton Moore, and Confederate Brig. General E. L. Tracy was placed in charge of it. During the remainder of 1861, the 4th-13th and 16th-20th regiments, as well as a battalion of infantry, successively trained here. Each of these regiments was organized with about a 1000 men. Due to the policy of moving regiments to the front as soon as they were sworn in, there were probably never more than 5000 men at Camp Moore at any one time. The 5th-10th regiments were sent to bolster the Confederacy's armies in Virginia, where they formed part of two Louisiana brigades. The other regiments served in the Confederate Army of Tennessee against the Union armies.

After the fall of New Orleans in April 1862, with Baton Rouge threatened by the Union Navy, Governor Moore made Camp Moore his headquarters during the second week in May 1862. At the end of July 1862, Confederate General John C. Breckenridge assembled about 5000 troops at Camp Moore. They marched to Baton Rouge and made an unsuccessful attempt to force the Federals out of the city on August 5, 1862. During the rest of the war, Camp Moore served as a base for small calvary units and as a training camp for some conscripts. Since the 1890s, local organizations including the Sons of the Confederate Veterans, the United Daughters of the Confederacy, and the Children of the Confederacy have worked with the State Legislature to preserve and maintain the cemetery. As of the present, the state of Louisiana's Office of State Parks owns approximately seven acres, including the cemetery and the Camp Moore Confederate Museum.