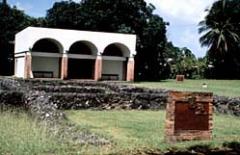 Spanish settlers called Caparra, the island's first capital, La Ciudad de Puerto Rico (the city of Puerto Rico). Ponce de León, Puerto Rico's first governor, established this first European settlement in 1508. His great ambitions for the settlement collapsed, however, due to the capital's vulnerability to Indian attack. Formal abandonment of Caparra occurred between 1519 and 1521, and the capital was moved to what is now old San Juan.