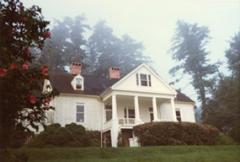 The home of America's poet, Carl Sandburg, is quite a baronial estate for an old socialist. It was designated as a National Historic Site in 1968 to honor Carl Sandburg's compelling collection of stories about the American people; their plights, struggles, joys and hopes as told through Sandburg's poetry, prose, journalism and biography. Taking a guided tour of the historic Carl Sandburg Home with over 65,000 artifacts on display is an insightful glimpse into the lives of the Sandburg family. Mrs. Sandburg owned and operated a premier goat dairy from 1935 to 1965. Here at Connemara the dairy became a Grade A operation, with milk being distributed to local dairies and sold in stores around the community.