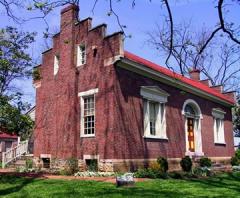 The modest brick home was commandeered to be used as the Federal Command Post while the Carter family, and two neighboring families, took refuge in the basement. At 4 PM on November 30, 1864, General John Bell Hood gave the order for the Confederate Army of Tennessee CSA to attack the breastworks held by the Federal troops in Franklin. The battle that ensued is now called "the Gettysburg of the West". The 1,000 bullet holes that today remain in the side of the house testify to the ferocity of the fighting. Indeed, the Carter house is the most bullet-damaged building that remains standing from the entire Civil War.

This Registered National Historic Landmark is now open to the public and serves as a memorial to the Carter Family and to the countless heroes in the Battle of Franklin. Visitors tour the house with a guide who explains the rich history of this tragic site.