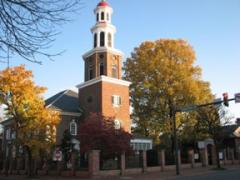 Christ Church was the first Episcopal Church in Alexandria and has played an important role in the life of the city since its completion by John Carlyle in 1773. The church was designed by James Wren in the colonial Georgian style. George Washington and Robert E. Lee were regular worshippers. Other prominent persons have worshipped here, including many U.S. presidents. One of the most notable visits was that of President Franklin D. Roosevelt and Sir Winston Churchill, who attended services here on the World Day of Prayer for Peace, January 1, 1942.