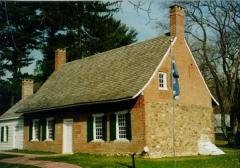 George Washington was invited to stay at the home by the DeWint family, first during August 8th to the 24th, 1780, while he was inspecting a redoubt on the Hudson. Later that year, Washington returned in late September for the trial and subsequent hanging of the British spy, Major John André. André had been captured after a meeting with American General, Benedict Arnold, at which they made plans to betray the fortifications at West Point. During a snowstorm in November 1783, Washington again stayed in the home. Today, careful research and historic restoration have allowed the home to remain in the condition it once was when George Washington stayed there.