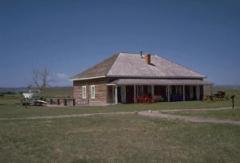 As an outpost of civilization on the Western frontier, the fort represented protection and a haven to travelers. During the mid-1870s, Fort Fetterman reached its pinnacle of importance when it became the jumping-off place for several major military expeditions. It was the base for three of General George Crook's Powder River Expeditions and Colonel Randall Mackenzie's campaign against Dull Knife and the Cheyenne Indians. These events contributed to the end of the resistance by the Plains Indians who shortly after were confined to reservations. With the passing of Indians from the scene, the fort had outlived its usefulness.