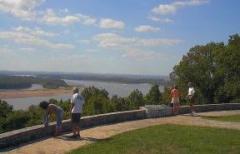 Founded in 1703, the town was for more than a century the region’s principal commercial center, also serving from 1818 to 1820 as the first capital of Illinois. The small fort, containing only a three-room barrack and a kitchen, was apparently never fully completed. The fort was periodically occupied by French or U.S. troops until 1807 and sheltered local settlers during Indian scares rising from the War of 1812.

The remnants of Fort Kaskaskia include long earthworks forming a rough square, with bastions at the corners. Garrison Hill Cemetery was established in 1891 by the General Assembly for the remains of early settlers whose graves were threatened by the flooding of Kaskaskia. A large monument erected in 1892 and commemorating the early settlers is also located in the cemetery.

The grassy bluff overlooking the Mississippi provides a sweeping view of the river and Kaskaskia Island. Panels describe the rich history of Kaskaskia village, including its destruction in the 1880s-1890s by the Mississippi River.