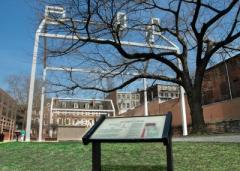 Franklin Court was the site of the handsome brick home of Benjamin Franklin, who lived here while serving in the Continental Congress and the Constitutional Convention. Franklin died here in 1790; the house was torn down about 20 years later. Today the site contains a steel "ghost structure" outlining the spot where Franklin's house stood and features an underground museum with a film and displays, an 18th century printing office, an architectural/archeological exhibit, an operating post office and a postal museum.