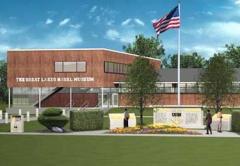 With special emphasis on the boot camp experience, the museum documents the Navy way of life.

The Naval Station Great Lakes Museum Exhibit is a government-owned and operated museum dedicated to telling the story of "boot camp" training in the United States Navy, and in particular, the Naval Station Great Lakes, Illinois. Although originally one of four boot camps, it is now home to Recruit Training Command, the only Navy recruit training command. A special section of the museum is dedicated to the expanding role of women in the United States Navy.