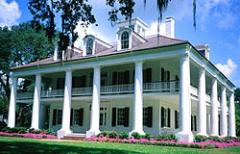 The Houmas house is significant in the area of architecture as an excellent example of a plantation house designed in the peripteral mode of the Greek Revival. It represents an important regional variation of the Greek Revival, which typified many of the grandest residences in the deep South. Houmas house is also historically important because under owner John Burnside in the 1850s and 60s it was the center of the largest slave holding in Louisiana. With over 800 slaves, it represented the largest economic unit in the prevailing slave economy of the state's pre-Civil War period. The plantation house began in the late 18th or early 19th century as a two-story, pitched roof brick building with end wall chimneys and a stuccoed exterior. The house had two rooms on each floor with a central staircase, six over six windows, and exposed beams, some of which were beaded. Although it presents a historic appearance, this old portion of the house has been much reworked. Changes made by Dr. Crozat include the removal of the stairs, the addition of an upstairs hall with a Palladian window, the replacement of the fireplaces and mantels, and the installation of closets and cupboards.

In 1840 a square plan, two and a half-story, peripteral style mansion of stuccoed brick was built in front of the original portion. The normal rear gallery was omitted because of the close proximity of the old house. The 1840 portion is three rooms deep with a wide central hall plan. It has a graceful helix staircase set in a rear vestibule opposite a corresponding curving wall. The dining room and front parlor connect by means of wide doors. Significant exterior features include the handsome colossal Doric galleries, the Federal arched dormers, the cupola, and the movable louvered shutters. The axial formal garden, which extends to the sides and rear of the house, is largely the result of work done by former owner Dr. George Crozat in the 1940s. In the 1940s Dr. Crozat demolished a pair of rooms which had connected the older portion with the 1840 portion, and built a glazed breezeway with an arch at each end. He also installed a modern kitchen and bathrooms in the 1840s portion.

Mansion and gardens $20, Gardens and grounds only $10