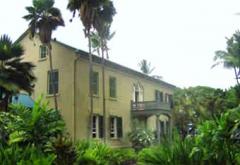 Built in 1838 by Governor John Adams Kuakini (cousin of King Kamehameha), Hulihe`e Palace remained until 1916 a vacation spa for Hawai`ian royalty. The historic two-story structure, now a museum, has been restored to the Kalakaua period and features ancient Hawai`ian artifacts and treasured heirlooms. Majestically surrounded by an expanse of lawn and trees, Hulihe`e Palace stands on the shores of Kailua-Kona on the Island of Hawai`i across from Mokuaikaua Church, a handsome coral and lava structure arduously built by the island's first Christians.