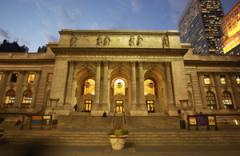 The Carl H. Pforzheimer Collection of Shelley and His Circle is one of the world's leading repositories for the study of English Romanticism. Its holdings consist of some 25,000 books, manuscripts, letters, and other objects, chiefly from the late eighteenth and early nineteenth centuries. Authors included within the collection are Percy Bysshe Shelley and his contemporaries, including his second wife, Mary Wollstonecraft Shelley, her parents, William Godwin and Mary Wollstonecraft, and such friends and fellow writers as Lord Byron, Claire Clairmont, Teresa Guiccioli, Thomas Jefferson Hogg, Leigh Hunt, Thomas Love Peacock, Horace Smith, and Edward John Trelawny.

Exhibitions of varying themes held at the Library highlight these and other collections within the Library.